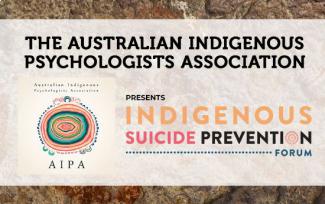 Tanja Hervonen facilitated panel discussions and yarns about suicide prevention and was generally a great addition to the team delivering the conference. As Tanja is an Aboriginal psychologist herself, and a member of AbStarr her contributions on social and emotional wellbeing, and appropriate build and evaluation of programs was very insightful.

Annette Vickery spoke on a panel with Professor Tom Calma of Reconciliation Australia and Andrea Kelley of NIAA on evaluating how effectively Federal, State and community programs are aligning to prevent Indigenous suicide.  Annette made the points that self-determination is key to deliverable outcomes in suicide prevention and postvention, that grassroots programs need support as they are often more effective than larger programs with frameworks, KPIs and outputs.  Annette also welcomed a key change in policy which values and recognises lived experience in all elements of suicide prevention and postvention.

An important point made in the conference was the impact mainstream organisations can have, both positive and negative, when they are funded for Aboriginal community service delivery and lack the capacity or capability to engage effectively in those communities.  There were strong calls for all funding for suicide prevention, intervention, postvention and after care to be managed by Aboriginal Communities.