Tammy Lovett, a traditional descendant of the Gunditjmara Nation (clans) located in South West Victoria and has lineage from both south west and eastern sides of the nation.  One of eight children Tammy grew up on her traditional country.

Tammy also lived in Shepparton, (Yorta Yorta Nation) Northern Victoria for many years. Growing up in strong communities, by strong people has nurtured Tammy to grow to pursue and continue the plight for her people to be involved in ongoing developments locally, regionally and nationally.  Tammy has worked for over 30 years in the children and families service sector and has worked in various positions in both Aboriginal and mainstream services along with State Government.  Elements of being in the sector have included engaging children and families in the Out of Home Care, community health, and mental health. Tammy has been equally active in community development projects.

Tammy is known to many Aboriginal communities across Victoria and is known throughout the service sector as a respected person who has been committed to enhancing the life opportunities for children and young people.

A major highlight in Tammy’s work life was the success of a state-wide rollout after undertaking a pilot program in 2002.The Aboriginal Family Decision Making Program (AFLDM) was established as a partnership between Rumbalara Aboriginal Co-operative in Mooroopna, Victoria and the Department of Human Services (DHS) as it was known then.  The model initially adapted from New Zealand Family Group Conferencing model and adapted to incorporate Aboriginal methods of decision making continues today within regions across Victoria. Tammy obtained her Bachelor of Social Work in 2014, at Deakin University, Geelong, Victoria. 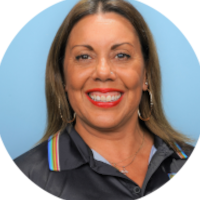