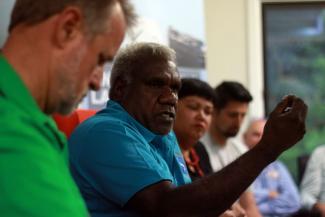 A small, isolated Indigenous community in the Gulf of Carpentaria that has been left reeling from a spate of suicides is set to benefit from a funding boost to a community support service.

The service to prevent Indigenous suicides is getting a $10 million boost as the Government begins to roll it out across Australia.

The project, trialled in Western Australia last year, will be expanded into the Northern Territory and South Australia this year, with the rest of the country to follow in 2018.

Tony Wurramarraba, chairman of the Anindilyakwa Land Council, said when one person in Groote Eylandt died, everyone was affected.

"Everyone's related here and everyone knows each other, and it's very sad when we do lose a young one," he said.

He said technology and social media had a negative impact on traditional life in the community of about 1,200 people.

"It has been like a trigger, it changes them," he said.

"Bullying on technology, on mobile phones, talking, sending messages and that sort of stuff … to the young ones when they do get those messages and die, it really has a serious effect on them.

"Our children are dying and we feel helpless."

Mr Wurramarraba said the suicides were a relatively recent phenomenon and were a result of the disempowerment of communities and elders who once played a much stronger role in disciplining young people.

Mr Scullion said every suicide was a tragedy and the effects on tight-knit Aboriginal and Torres Strait Islander communities were often more profound, "contributing to the clusters of suicide and self-harm that we see".

The Critical Response Service (CRS) is led by Adele Cox, a Bunuba and Gija woman from WA who has worked in suicide prevention for almost two decades.

"Families are struggling, families aren't sure where to go," she said.

"There are so many families and communities who were not being provided with the right sort of support with regard to response times as soon as a suicide or a traumatic incident occurred."

Members of the CRS team reach out to families affected by suicide and coordinate existing support services to ensure they are delivered in a culturally appropriate way to respond to each family's particular needs.

People fall between the cracks 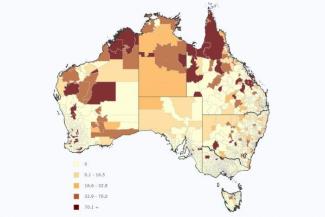 Senator Scullion said a report the Government commissioned in July confirmed what he saw as he travelled from community to community.

"A myriad of support services delivered by different agencies and not-for-profit organisations but with little coordination between them to make sure families are properly supported in times of great distress," he said.

"The effect is that people fall between the cracks."

He said the service was led by communities, and denied the focus on support after a suicide was taking away from suicide prevention.

"You'll always find a critic, 'Oh, it's the ambulance at the bottom of the cliff,' well, this particular cliff you need something there," Senator Scullion said.

"This is not an ambulance, it's a springboard. This is something to catch people at that particular time because we know there is a cliff there and that's why we responded to it."