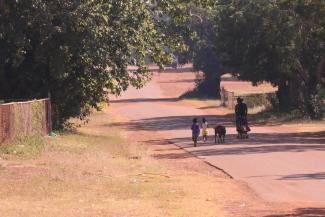 The meeting is part of a crisis response to the high rates of death by suicide in Aboriginal communities.

In some Indigenous communities in Australia, suicide rates are among the highest in the world.

BRIDGET BRENNAN: Adele Cox is a Bunuba and Gija woman from the Kimberley in Western Australia.

For 15 years, she's been researching suicide prevention in Aboriginal communities.

She's worried about what she describes as a growing crisis affecting her people.

ADELE COX: The effect is huge. I would even personally say that suicide now and death by suicide in some settings has become so normalised, as soon as my mob here all get a phone call saying that, you know, this young person or there was another young person who's passed away, sadly people go almost my default to the expectation that yeah, that young person died by suicide.

BRIDGET BRENNAN: Twenty-five Indigenous leaders and mental health experts are taking their case to Canberra, urging the Government to adopt a national plan to drive down the rates of suicide in their communities.

Adele Cox will chair the meeting. She thinks it's long overdue.

ADELE COX: For the last 20, almost 20 years, we've seen such huge increases in the rates of suicide in Aboriginal and Torres Strait Islander communities.

Yet within 20 years, we haven't seen or had the type of investment in terms of supporting communities to actually tackle and address some of these issues.

GERRY GEORGATOS: It's a pressing issue. It should be the priority of any government and the legacy that we need now, immediately, is a critical response.

In many regions across our country, for instance in the Kimberley and in the far north Queensland and jurisdictionally the Northern Territory, we've got suicide rates seven times the national trend.

BRIDGET BRENNAN: It's understood the ministers will consider a proposal to send critical response teams to some communities affected by high rates of suicide.

Other groups want the Government to pay for more mental health services, staffed 24 hours a day, in remote Indigenous communities.